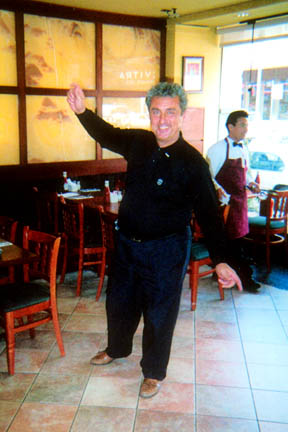 Carlino Giampolo traveled to each of the 50 U.S. states, making time to dance in each one. Here, he taps into the Stage Door restaurant, across from Penn Station in New York City. Photo courtesy Carlino Giampolo

The following article appeared in the Honolulu Star-Bulletin.
Reprinted with permission.

By Jim Winpenny Special to the Star-Bulletin

For Phileas Fogg, an 80-day trip began and ended in London in 1872. He was daunted by storms, an Indian attack and other perils.

For Carlino Giampolo, an 80-day trip began and ended in Honolulu in 2004. He remained undaunted – and danced – all the way.

Why would Giampolo, publisher of the visitor tabloid Paradise News, want to dance his way across America? Hard to say. Why would he drive the same gold Chrysler convertible around Oahu for 15 years without ever putting the top up? Why would he write and publish a self-help book on surviving broken relationships when he holds no doctorate or degree in psychology? Why would he write and publish an instruction book on golf when he’d been swinging clubs for only a couple of years? Why would he launch a campaign against unsightly, modernistic traffic-light fixtures in Waikiki as an affront to the Hawaiian people when he is a Pittsburgh native of Italian heritage?

This dancing-across-America thing: A tie in with the new “Around the World in 80 Days” Jackie Chan movie, perhaps?

“No,” he says, “I didn’t even know they’d be making the movie when I began in January.”

A lady friend, who would be my traveling companion for a trip we hadn’t planned yet, said, ‘I have never been to Florida, and I would like to visit there.’ So I took that thought and expanded it 50 times. I decided to do them all.”

But Giampolo didn’t want to visit 50 states without purpose, so he imposed two stipulations for this journey. The first was to stay at least one night in each state; the other was to dance in each state, in 50 different restaurants.

Total miles traveled: 55,700. That’s equivalent to two trips around the world at the equator. Carlino danced in 30 states with his companion, but she then had to return to her native country because of visa requirements. He handled the remaining 20 states alone. That brought about a change in the dance routine. “When I had a partner, we did a short swing dance. When I was alone, I did a little tap routine.”

He had learned from past travels to always do the most important thing first. When entering a new city, his first question to residents was, “What is your best or most unique restaurant?” Then, almost as an afterthought, “What are your most interesting places to visit?”

Cities he selected were determined by what he thought would be fun and interesting to see, and by what cities were served by Amtrak. Most of his travel was with Amtrak’s North America Rail Pass Plan, which allows unlimited travel for 30 days. He took Greyhound buses when it was more convenient or when it could take him to states without Amtrak service. In many cases he rented a car.

Along the way, he learned a lot about this nation. He was surprised to learn that it took three days by ferry to reach Alaska from Seattle. He chose a three-hour flight to Anchorage, which took more time than it takes to fly over half the mainland.

No restaurant in any city refused his request to dance there. In every case the restaurant manager or a waiter took a photo of the actual dancing.

The bad weather always was either just ahead of him or just behind him. His only encounter with snow was in Nebraska.

In Missoula, Mont., he was checking out of his hotel when the front desk clerk noticed from his credit card that he was from Hawaii. She asked, “Do you know Mr. Goodburger?” He replied, “No, I never met him.”

She said, “I mean the restaurant.”

The he understood. His friend, entrepreneur, Wes Zane, was in Missoula at the time to set up the franchising of his Mr. Goodburger restaurant to a resident in Missoula.

He found Mt. Rushmore in South Dakota to be awe-inspiring, especially when seen in the early morning sunlight. The monument to four of our presidents took 14 years to complete. Nearby was the mountain carving of Crazy Horse, which – when finished – will be the largest mountain carving in the world, at 563 by 641 feet. All four 60-foot heads on Mount Rushmore would fit inside the carving of Crazy Horse’s head, with room to spare.

New Jersey, he learned, has the most cherry blossom trees of any state – even more than Washington, D.C., whose Cherry Blossom Festival is world famous.

In Portland Ore., he went to the world’s largest Cinco de Mayo Festival outside of Mexico.

He discovered the country’s only capital city with no McDonald’s, no Burger King and no Starbuck’s: Montpelier, Vt. People there, he says, are very proud of that distinction.

When he arrived in Gillette, Wyo., he was walking from the train station to his hotel when he had to walk (dance?) around horse dung. A sign on the door of the hotel where he stayed reads, “Please remove your dirty boots before entering.” He then thought of a title for a book MidWeek editor Don Chapman might write: “You Know Your Not in Honolulu When…”

Will Giampolo write and publish a book about his tripping across the country?

He says he will, but only to thank all the people and companies that helped to make the trip successful and enjoyable. He has presented a large cake to the local AAA office for their help in booking hotels for him and for mapping out car routes for 13 states.

Now back in Honolulu, Giampolo quietly contemplates his next venture. He says he has no idea what that might be.